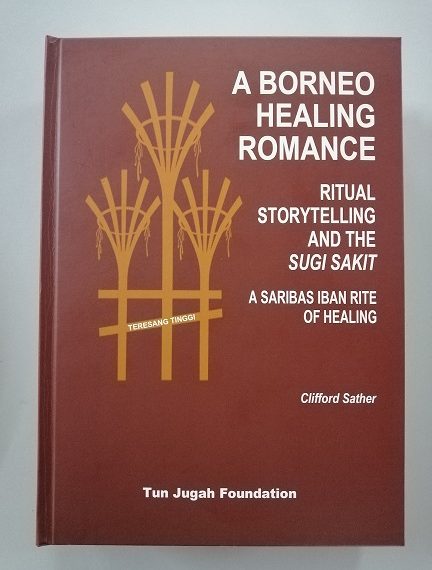 This book contains a full Iban text and translation of the entire ritual performance by a well-known bard named Renang anak Jabing together with his extensive commentary. Its distinctive feature is incorporating a narrative epic of adventure and romance of Bujang Sugi, the Iban hero, Keling in disguise. The book has description of Iban notions of illness and well-being, traditional practices, role of priest bards who used poetic language which was structured as a rite of healing.  Another important feature of the book is the role of romantic love and compassion with their social and symbolic setting which served as an instrument of healing.

Clifford Sather received his PhD in social anthropology from Harvard University in 1971. His principal publications include The Bajau Laut: Adaptation, History, and Fate in a Maritime Fishing Society of Southeastern Sabah (1997, Oxford UP and Seeds of Play, Words of Power: Ethnographic Study of Iban Shamanic Chants (2001, Tun Jugah Foundation &BRC). He is also co-editor (with James J. Fox) of Origins, Ancestors and Alliance: Explorations in Austronesian ethnography (1996, Australian National University) and (with Timo Kaartinen)of Beyond the Horizon: Essays on Myth, History, Travel and Society (2008, Finnish Literature Society) Dr. Sather taught and held research positions in Southeast Asia (Universiti Sains Malaysia, University Malaysia Sarawak, and the National University of Singapore), Australia (Research School of Pacific and Asian Studies, The Australian National University), Europe (University of Helsinki), and the United States (Vassar College, Reed College, and University of Oregon). He retired in 2005 as Professional Fellow from University of Helsinki, Finland. He is currently editor of the Borneo Research Bulletin, the annual journal of Borneo Research Council, a position he has held since 1995.