Up to October 2014, the Oral History Section of the Tun Jugah Foundation has recorded more than 700 hours of various categories and forms of oral literature. Among them are as follows:

(b)   Life Histories of Iban elders 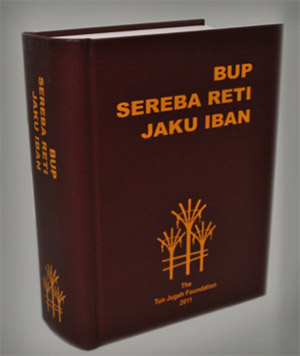 The Foundation, through its Oral History Section, has successfully compiled and published the first Iban Dictionary which is called “Bup Sereba Reti Jaku Iban”. It is the first dictionary of its kind for a Bornean language. This work, more than a decade in preparation and drawing upon six extant lexicons, all familiar to students of Iban, includes both vernacular and ritual speech, and is invaluable for both native and non-native speakers. The dictionary which has 1,359 pages is a `must have’ for every serious student. Those who are interested to purchase the dictionary can order the book from the Tun Jugah Foundation at Level 4 Tun Jugah Tower, 18 Tunku Abdul Rahman Road, 93100 Kuching, Sarawak, Malaysia (Tel: +6 082 239672, Fax: +6082 412185). Ordering of the book can also be made through email to [email protected]. A paper back copy of the dictionary cost RM100 and RM120 for a hard cover, excluding cost of postage.

The dictionary was compiled by a panel of Iban writers who are professionals, teachers, and culturists. The intended users of the dictionary are the Iban community in general and the Iban students in particular. Others, especially foreign scholars, who want to learn about the Iban language and carry out research on Iban culture, customs and creeds will find this dictionary a useful tool for reference.

Bup Sereba Reti Jaku Iban is a remarkable publication and one well worthy of study and modeling by students of other languages of Borneo. Inquiries to linguists and lexicographers familiar with Borneo languages confirm that, to our collective knowledge, there is nothing quite like it. Ten years in the production and facing numerous challenges, each of which was eventually solved, the research for this dictionary and its publication are due to the Editors and staff of The Tun Jugah Foundation, and to the Chairman of the Foundation, Tan Sri Datuk Amar (Dr) Leonard Linggi Jugah. 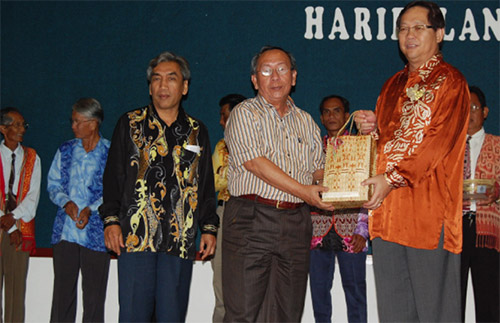 The Oral History Section of the Foundation had successfully carried out two surveys on rural-urban migration. The first one was carried out from 2007 to 2008 involving longhouse dwellers from upper Baleh river as well as other areas in the Kapit Division of Sarawak who have moved down to areas near or within the Kapit town since the past fifteen years. More than 1,300 Iban families/households from more than 45 settlement areas were included as respondents in this survey. The other survey was carried out in 2009 involving some Ibans from various parts of Sarawak who are currently settling down at Pasir Gudang areas in Johor, West Malaysia.

The Tun Jugah Foundation had also carried out a research project on the Iban traditional leadership related to Penghulu System from 2010 to 2011. The main objective of this project is to study the changing pattern of Iban leadership from the early days until today.  The report of this study entitled Iban leadership: Some Reflections on the Penghulu System by Dr. Peter Mulok Kedit, was published in the 2nd  Issue 2012 of the Foundation’s  bi-annual bulletin NGINGIT.

The Tun Jugah Foundation is also  carrying out research on the various cultural and physical aspects of constructing an Iban traditional longhouse since 2012. Its Research Officer, Janang Ensiring is tasked to carry out this project.  The traditional methods of constructing an Iban longhouse is no longer being practiced in Sarawak now. As such, it is regarded as important to compile as much information as possible on the Iban traditional longhouse from various cultural and physical perspectives which are useful as reference materials for the younger generation as well as researchers. Report on this project shall be published in due course.

Besides research projects carried out by local researchers, the Foundation also has a few foreign researchers (research fellows) currently carrying out research works on selected fields. Professor Emeritus Dr. Vinson Sutlive and Joanne Sutlive had completed their project on Sabak (dirge) which had been published  in two volumes under the title of  Tears of Sorrow and Words of Hope.  Professor Dr. Clifford Sather is still  carrying out  joint research project on ritual chant (Besugi Sakit) with Tun Jugah Foundation. The project is expected to be completed  soon. 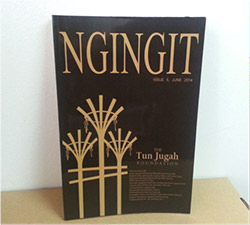 The Tun Jugah Foundation is publishing a bi-annual  bulletin called NGINGIT since 2012. The objectives of publishing this bulletin are to record the activities carried out by the Tun Jugah Foundation;  publish the articles on Iban folklore contributed by both local and expatriate writers; publish research materials that touch on a wide variety of topics which are dear to the Ibans, contributed by both local and foreign scholars; disperse pertinent information to a wider audience as readership for this bulletin includes foreign researchers and writers;  and to promote reading culture especially among the Iban community.